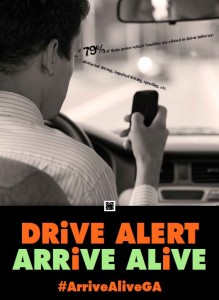 Traffic deaths have increased to an average of 100 a month. At this rate, Georgia could see the first annual increase in nine years! We’re sounding the alarm about this epidemic of crashes and fatalities, many of which are preventable.

DriveAlert ArriveAlive is a statewide safety campaign that educates drivers about changes they can make in their driving behavior to reduce preventable crashes by eliminating distractions. It implores drivers to buckle up; stay off the phone; and to drive alert.

What can you do? You can help Georgia DOT spread the word…

DriveAlert ArriveAlive asks drivers to drive responsibility by following three steps every time they get behind the wheel.

“It’s startling when you consider that 60 percent of traffic fatalities in Georgia so far this year are the result of a single vehicle crash,” said Harris Blackwood, executive director of the Governor’s Office of Highway Safety. “We are looking at driver behavior as a primary cause – specifically distracted driving.”

Georgia DOT has worked for years to avoid roadway departures, to increase occupant protection, and to reduce distracted driving with a goal towards zero deaths. Measures like safety edge, rumble strips, center median cable barriers, high friction surface treatments, reflective signage and striping, and pedestrian countdown timers have all contributed to nine consecutive years of decreased roadway fatalities in Georgia. The goal of DriveAlert ArriveAlive is to continue the downward trend.

Please join our effort to turn the tide on preventable crashes and deaths in Georgia. With your help, we can save lives!