You don’t have to ask yourself what to do in Duluth because a ghoulishly good time awaits all ghosts, goblins, mummies, humans and canines as Howl on the Green invades Downtown Duluth, with a boo-nanza of bewitching fun, Friday, October 30th starting at 6:00 p.m.!

This final fang-tastic Fridays-N-Duluth of 2015 will fly away until next year, but not before this haunt-ingly good time unveils a fright-night of entertainment including Fire dancers, Aerialists, Breakdancing Werewolves and other Creepy Creatures!

Those victims brave enough to return for another season of Howl on the Green will be bone-chillingly thrilled that DJ Rob and Luminocity Entertainment Division (LED) are back for a third year to wow everyone with spook-tacular music, dancing characters, a hair-raising entertainment, and an aerialist performance!

Costumed contestants will over-run Duluth Town Green with a bewitching mix of attire to impress the judges!  There will be separate divisions for kids, adults, families/groups and a Hall-O-Weenie class just for daring dogs who aren’t afraid of other creepy critters in costume!

Four separate age categories will cover all the little ones in the Lil’ Wolves division of the costume contest. One frightening WOLF PACK prize will be awarded for best family costume.  A WEREWOLVES competition will include those daring adults going solo in costume with both a men’s and women’s winner!  And the evening includes two categories for best costumed canines!

Three human judges will crown the scariest human costume winners, while Brady Charles, the Hall-O-Weenie wonder judge, will once again “sniff-out” the best Canine Costume!  This spirited pooch will return to the stage to “cast his spell” in choosing a winner for both the large and small dog categories!

The Hall-O-Weenie canine contest hosted by dog-judge extraordinaire Brady Charles, will take the stage at 7:30 p.m. with a small dog group of those weighing 35 pounds or less, and a larger dog grouping for those rattling the scales at more than 35 pounds!  Those frightful SOLO men and women entering the WEREWOLVES division will compete at 8:00 p.m.

Ghoulishly great gift baskets will be the prize for all human winners and canines will win their own basket of delectable treats!   There will be a limit of ten entrants per category for all human and pooch divisions.  Open registration starts one hour before the costume contests and must be done on site! So get your bones down to the Duluth Town Green early to enter this freakishly fun event!  (Please NO weapons, sharp objects or pyrotechnics as added accoutrements to your costume!)

Hair-raisingly great food will invade Howl on the Green, October 30th with a bewitching caravan of gourmet trucks as temptation to all ghosts, goblins, and other characters who dare to visit the area for this devilish night of surprises!

The American Red Cross will be collecting your blood as their bloodmobile makes a Halloween landing to take donations from 5:00 – 9:00 p.m.  Anyone 17 or older can donate and reservations are suggested but not required using the sponsor code: “CityofDuluth” or by calling 1-800-Red-Cross.   Blood donations are always needed especially after the South Carolina floods!

Keeping all creepy characters entertained is challenging!  But giant games will be available at Howl on the Green with life-sized Checkers, Chess, Connect 4, Hi-Towner, and a Bounce House!  Fun crafts will be available and the Duluth Town Train will take any ghosts, goblins or humans needing a ride, to destinations unknown!

Come join all of the hair-raising Halloween fun with this Fridays-N-Duluth fang-tastic finale, October 30th from 6:00 – 9:00 p.m.!  Start planning a costume now for you or a four-legged canine companion and enjoy a Fright-Night Friday!  It promises to be a howling good time!!

It’s an early fall Fridays-N-Duluth that might be cooler in temperature but HOT with activities when STE(A)M debuts at the event this Friday, October 23!  The evening will be filled with the wonders of Science, Technology, Engineering, Art and Math (STE(A)M) to be enjoyed by all ages, and also includes a concert by crowd-favorite The Regulars Band, all occurring in Downtown Duluth. As with every Fridays-N-Duluth, the fun begins at 6:00 p.m. and ends at 9:00 p.m.

STE(A)M activities are kid friendly and include interactive displays sponsored by community groups, companies and individuals that challenge keen minds and demonstrate how everyday items can be used in imaginative and innovative ways.  Scheduled STE(A)M participants and programs include:

Also occurring during this evening of fun-filled activities will be the Fridays-N-Duluth favorite games of Life-Sized Checkers, Chess, Connect 4, and Hi-Towner.  Downtown Duluth shops will remain open and food options for Friday dining will abound.

Duluth-favorite The Regulars Band will be the featured group for this October 23rd Fridays-N-Duluth. Brother, Lee, and sister, Lindsey, Smith will take the Duluth Town Green Stage for this event. Backed by band members Douglas Ehlen on electric guitar, Clay Davis on “funky bass”, and Elliott Phillips on drums, this group always gives the Duluth crowd a night of “equal parts Rock and Funk, with a whole lot of Soul sprinkled on top!”

Howl on the Green and the last scheduled Fridays-N-Duluth on October 30th   will invade the Duluth Town Green with ”howling” ghosts and goblins. More ghoulish details will be coming.

Thank you Duluth residents for a memorable Fridays-N-Duluth season!  But do not miss these final two Friday night things to do in Duluth that will be two October nights to remember, with unique events, family fun, and great live music! 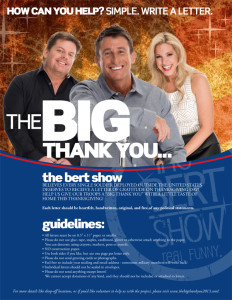 There is a drop box for letters, in the lobby, at Duluth’s Public Safety Building, at 3276 Buford Highway, Duluth, 30096, until October 26th, 2015. Letters must be submitted by October 26th to ensure that soldiers receive them on Thanksgiving.

Per the guidelines of the Bert Show, each letter should be heartfelt, handwritten, original, and free of any political statements. The purpose of the letter is to express thanks to the military personnel currently deployed outside the United States. We reserve the right to eliminate those messages that are political in nature and do not reflect a positive message in the spirit of Thanksgiving.