The City of Duluth, in partnership with the City of Johns Creek, Gwinnett County and Fulton County broke ground on the pedestrian bridge at Rogers Bridge Park this morning. Representatives from all sides were present and participated in the ceremony.

This is a partnership 15 years in the making! In 2006, Gwinnett County commissioned a study of Rogers Bridge to determine its structural integrity. The goal was to repurpose the bridge for pedestrians and in doing so, reconnect the communities on each side of the Chattahoochee River. In 2014, the City of Duluth took over the project and confirmed the study results. Duluth then applied for a grant from the Atlanta Regional Commission in order to develop construction plans for the bridge. The grant provided $560,000 to the City and required a local match in the amount of $140,000. As the project is of regional significance, Duluth teamed up with the City of Johns Creek and Fulton and Gwinnett Counties to come up with the $140,000 match. Evenly split, each local partner contributed $35,000 toward what is referred to as the “preconstruction” effort, which culminated in the development of construction plans.

At the time the plans were in their initial stages of development, it was not yet known if the bridge would be rehabilitated or replaced. Along the preconstruction journey, it was determined that the existing bridge was eligible for the National Register of Historic Places due to its unique construction method. The existing bridge is a 228’ long pin-connected Pennsylvania Petit truss. As such, the design team carefully documented the bridge’s history as well as its current condition. Ultimately, the Department of Natural Resources agreed the bridge could not be salvaged as is and approved its replacement. Concurrently, the preconstruction team reached out to citizens and stakeholders through various meetings and public open houses held in multiple locations (in multiple languages) to gain feedback as to what the ultimate users of the facility would want. Participants voted on their favored selection of bridge type and it was ultimately determined that a replica truss would best suit the needs of the end users. Both Councils and both Commissions concurred and the design team moved forward with developing construction plans for the replica truss.

The preconstruction process took about 4 years to complete and followed strict state and federal guidelines. Once again, the City reached out to the Atlanta Regional Commission and the Georgia Department of Transportation to assist with funding of the construction. And again, the four local partners came together, this time to participate with $350,000 each for a local match of $1,400,000. GDOT covered approximately $700,000. And ARC covered the remaining approximate $5,100,000. We anticipate the construction to take 18 months and be completed in the summer of 2022, at which time we will celebrate the partnerships we’ve built as well as the new structure itself.

The preconstruction team included Duluth, Johns Creek, Fulton County and Gwinnett County as financial match partners along with the Atlanta Regional Commission, Federal Highway Administration, National Parks Services, Georgia DOT and the Environmental Protection Division’s Department of Natural Resources as additional governmental partners. In addition, Parks Departments from both Cities, Historical Societies from both Cities and local bike/pedestrian advocates participated on our stakeholder team. The design was led by Development Planning & Engineering with structural design support from CHA and environmental documentation and process support by Edwards-Pitman Environmental, Inc. While Duluth managed the project and the process during preconstruction and will continue to do so through construction, all major decisions were vetted by the stakeholder group and approved by the financial partners. The construction team is led by Astra Group with KCI Technologies representing the City’s interests as the construction administrator on site.

The City of Duluth is looking forward to a successful project and a beautiful bridge connecting us to our neighbors across the Chattahoochee River.

City of Duluth Council Member Kelvin J. Kelkenberg was awarded the Leadership & Service Award from the Gwinnett Municipal Association (GwMA) at the City’s last Council Meeting. Kelkenberg was well deserving of this recognition for his service as 2020 President of the GwMA Board.

GwMA is a 501-c3 nonprofit organization lead by Managing Director, Randy Meacham. This association was created by the cities of Gwinnett to help foster better cooperation within the county, improve the understanding of the complex issues that cities face and to provide for maximum efficiency and economy of taxpayer dollars. Traditionally, the GwMA board meets monthly at varying locations within Gwinnett County. 2020 looked a bit different with regular meeting being moved to a virtual forum.

Kelkenberg was uniquely qualified to act as President of GwMA during 2020’s ongoing battle with the COVID-19 pandemic through his 20 years of experience working in emergency management with FEMA. Together with Meacham, Kelkenberg hosted weekly meetings with the 16 GwMA cities to create a unified message and plan of action.

“Leading this organization during a pandemic may look like a heavy lift from the outside but it was the right thing to do. I appreciate the challenge of emergency management and was proud to utilize my years of training to guide the City of Duluth and other Gwinnett County cities during this time,” said Kelvin J. Kelkenberg.

Through his connections, Kelkenberg was able to arrange for Dr. Audrey Arona, District Health Director for Gwinnett, Newton and Rockdale County Health Departments and Greg Swanson, Emergency Management Director of Gwinnett County to be a part of these weekly calls. Their combined efforts enabled Gwinnett County cities to launch a campaign to encourage mask wearing, practice social distancing and celebrate our first responders.

GwMA and representatives from the 16 Gwinnett Cities are still holding regular weekly meetings with Dr. Arona and plan to continue doing so until all willing citizens receive a vaccine and we have achieved herd immunity. 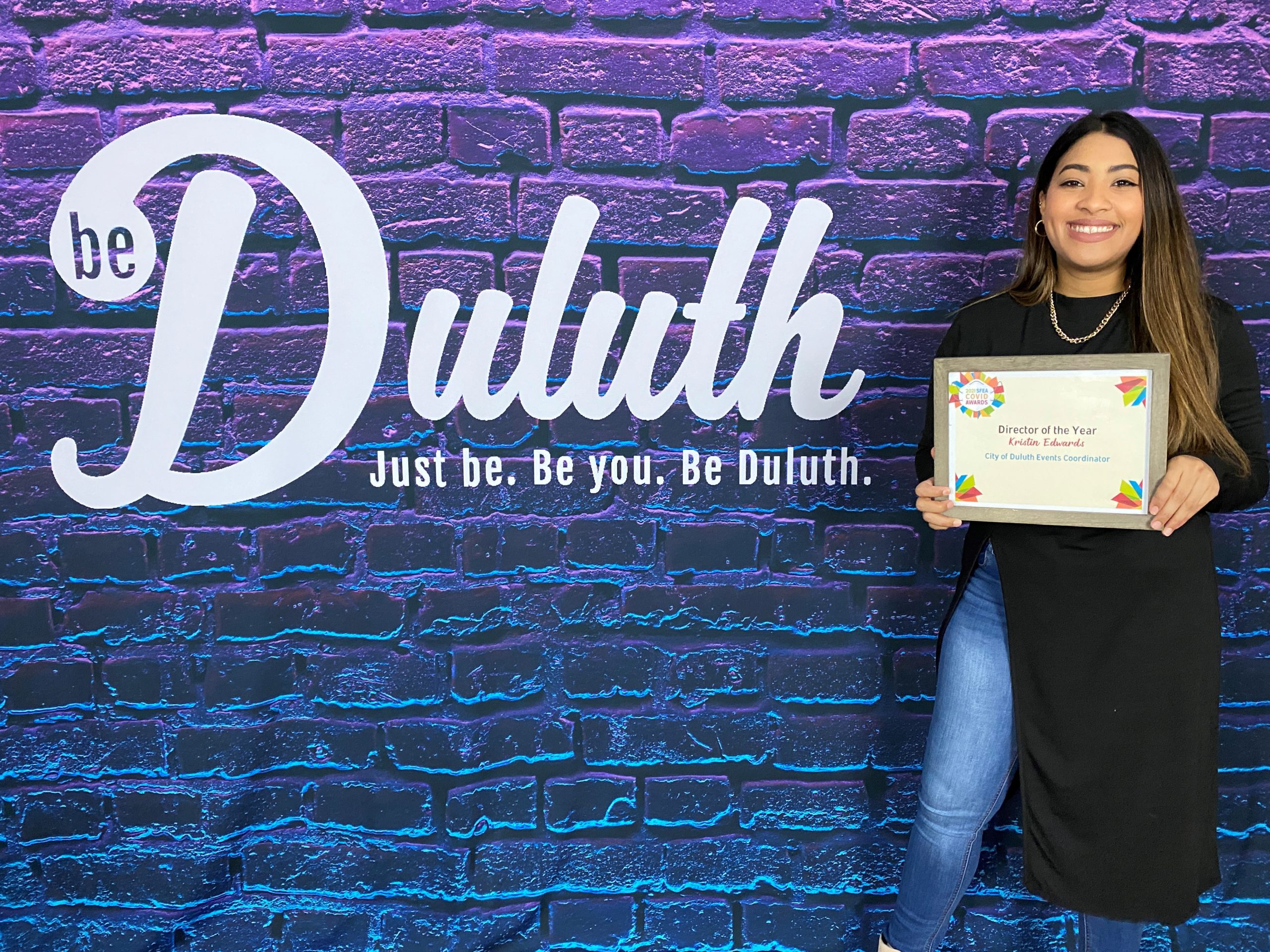 The Southeast Festivals and Events Association (SFEA) recognized Duluth’s Events Coordinator, Kristin Edwards, as Director of the Year for her efforts in providing Duluth with a fun, creative outlet, even during these challenging times.

Kristin Edwards has been coordinating events for the City since March of 2019. As you all know, most events in 2020 were cancelled with community health and safety coming forward as a top priority. By April of each year, the events coordinator typically has most of the events planned for the remainder of the season; so you can imagine how much work Kristin put into the events that never got to come to fruition. By late spring, discussions between the Events & Marketing Department, City Manager’s Office and the City Council led to the cancelling of all remaining scheduled events through the end of July.

Although she was disappointed, this tough but necessary decision did not stop Kristin from continuing to plan virtual and socially distanced events to bring entertainment to the community. During lockdown, a few virtual events were hosted. This included a TikTok Challenge and a Duluth Shines talent competition. Once lockdown was lifted, she really sprang into action. Her top priority was to stay on top of the current executive order given by Governor Kemp to ensure that we were following all restrictions and taking the proper precautions.

The first step back into normalcy was weekly Duluth Live “events”. These events consisted of music every Friday, Saturday and Sunday on the Town Green main stage and in Parsons Alley. These live musical performances were not meant to draw a crowd but rather enhance the ambiance for those that were utilizing the outdoor dining space. Other socially distanced activities were creatively themed photo-ops, Seek Duluth scavenger hunts, and a drive-in theater. The season ended with the annual Deck the Hall event which featured unique social distancing activities including photos with Santa inside a snow globe, free caricatures and tree lighting.

The award was accepted virtually at the annual SFEA Conference on February 24, 2021. The SFEA Kaleidoscope Awards, which recognizes the marketing, programming and overall event, acknowledges the highest level of achievement in the festival and event industry throughout the southeast United States.