If you assume a train will stop when the engineer sees a car on the tracks, you’re right — but trains need at least 18 football fields of track to reach a complete stop. Don’t risk it. 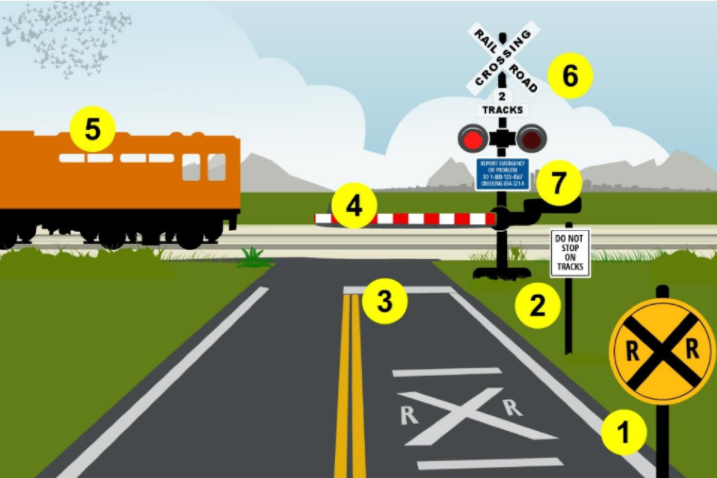 1. Stop, look both ways and listen. Remember that trains always have the right of way.
2. Make sure you have room to get across. Once you enter the crossing, keep moving.
3. Stop 15 feet away from flashing red lights, lowered gates, a signaling flagman or a stop sign.
4. Never try to drive around a lowering gate. Never ignore signals and always use caution.
5. Before you begin to cross, wait for gates to fully rise and for all lights to stop flashing.
6. Never assume that there is only one train coming from a single direction.
7. If your car stalls on a rail track, quickly get everyone out – even if you don’t see a train coming. Then, run away from the tracks and your car. Avoid running in the same direction that the train is coming, because you could be hit by flying debris if a train hits your car. When it’s safe to do so, call the number on the blue Emergency Notification System sign. If the sign is not visible to you, call 911.
Learn more by visiting the National Highway Traffic Safety Administration website.

By Jillian Price, The Atlanta Journal-Constitution

The Gwinnett city is showing its support for Ukraine — the European nation invaded by Russia — by showing the war-torn country’s colors.

Duluth has a personal connection to the country; one of their city employees is from Ukraine.

Alex Matsota, a maintenance technician, is from Kyiv, the nation’s capital. Matsota moved to Duluth in 1998 and has worked for the city for nine years.

Ever since fighting began, Matsota said he’s been in a state of shock.

Matsota, who has relatives who still live in Ukraine, is worried about their safety. Some family members, he said, lived just a few yards away from the shelling and where civilians were being killed in the street.

“Really hard to see streets where you walk, where you lived, covered, covered with broken buildings,” Matsota said through tears during a phone call on Thursday afternoon.

Matsota’s relatives were able to safely leave Kyiv and travel to western Ukraine, where it is safer. Matsota has continuously asked his family if they need anything, as they do not have many resources since leaving their homes. Though his family has not asked for anything for themselves, they have asked for money to help other families.

His family does not have plans to leave Ukraine right now.

Matsota is grateful that the city of Duluth and some of his neighbors are showing support for Ukraine and his family.

“I see the people. I see, you know, my coworkers over here. They worry, they worry not just about me. They worry about people over there, what’s happening,” Matsota said.

Duluth, which began lighting City Hall in Ukraine’s colors on March 2, is planning to keep the lights on the city hall for the next few weeks, said Jason Brock, deputy director for public works.

After serving more than 46 years at the Duluth Police Department, with 38 years as Chief, Chief Randy Belcher has announced his plans to retire in July. The City is moving forward with plans for his Deputy Chief, Colonel Jacquelyn Carruth, to be his replacement, taking over the top leadership spot in the agency. Col. Carruth, a 25-year veteran of the department, will be the first female Chief in the department’s 100-year history and will be one of only about 3% of Police Chiefs in the state who is females.

Since being hired in 1996, Colonel Carruth has worked in almost every area of the police department. She moved her way through the ranks by working hard and building leadership skills. Col. Carruth holds a Bachelor of Arts Degree in Psychology and a Master of Public Administration Degree from Columbus State University’s Law Enforcement Command College. She is also a graduate of the 252nd Session of the FBI National Academy. She has completed the Georgia Chief’s Executive Training and was a member of the 26th delegation of the Georgia International Law Enforcement Exchange Program (GILEE). Col. Carruth currently holds the position of Secretary of the Board on the Gwinnett Chiefs Association, and she is a member of various other state and national law enforcement organizations. Her extensive experience in law enforcement, specifically with the City of Duluth, will
ensure a smooth transition in leadership for the agency.

Without a doubt, Chief Belcher was an integral part of making the police department an outstanding and professional agency today. Under his leadership, the department rose from a mere 16 employees in 1984 to a state-accredited agency with a staff of 91 today. Chief Belcher started as a patrol officer in 1976, then became a detective, and continued to rise through the ranks, becoming a Sergeant, then Lieutenant, until he finally became the youngest serving Police Chief in Georgia in 1984.

Chief Belcher was also the department’s first-ever to attend and graduate from the FBI National Academy in Quantico, Virginia, in 1991.

One of the things that Chief Belcher has always tried to do is stay ahead of crime by implementing the latest ideas in technology. Under his direction, the police department began a camera monitoring program which has been an invaluable tool in identifying suspects and solving crimes throughout the City. There are 162 cameras placed in different locations throughout Duluth, including all our City Parks and almost the entire downtown area.

Chief Belcher also recognizes the importance of forming partnerships and engaging with citizens in the community as part of an overall strategy to keep Duluth safe. Under his command, several programs were implemented, including Citizens on Patrol, VIP Camera Monitoring Program, Coffee and Conversation with a Cop, Citizens Police Academy, Hispanic Citizens Police Academy, and Youth Police Academy. In recognition of his efforts, Chief Belcher was honored with the Gwinnett Chamber Leadership Award for excellence in community-oriented engagement in 2017.

While his officers and the community will sorely miss Chief Belcher, the legacy he leaves will be one of maintaining the integrity and high standards within the police department and a 100% commitment to serving the citizens of Duluth. While the average tenure of a Police Chief is a mere three years, Chief Belcher humbly attributes his longevity and success to the men and women he leads at the police department, support from City Officials, and support from the community.

Col. Carruth plans to continue building on the solid foundation that Chief Belcher has already set in place. Her focus will be on maintaining high standards of policing, continuing and expanding the department’s crime-fighting capabilities through the use of technology, and continuing to find ways to build positive relationships with all members of our community.