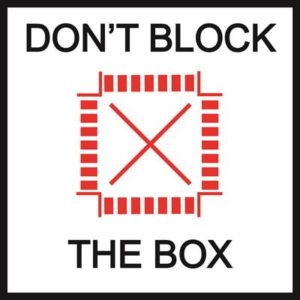 Many of you may have noticed the new signing and pavement marking at the intersections of SR 120 with Peachtree Industrial Boulevard and SR 120 with Buford Highway.  There are giant X’s painted in the middle of the intersections with black/white/red regulatory signs posted nearby, indicating “Don’t Block the Box” or “Do Not Block Intersection”.

WHAT DOES THIS MEAN?

Have you ever been waiting at a red light, only to see that when it finally turns green, the cross traffic is still stuck in the intersection, making it impossible for you to move?  Well, those cars in the middle of the intersection when their light is RED and your light is GREEN are “blocking the box”.  And whether they realize it or not, it is illegal in Georgia.

Blocking the box or being stuck in the intersection during a red light is not only inconvenient, it is dangerous.  Aside from the additional delay those vehicles in the box are causing to cross traffic, they are also blocking emergency vehicles from getting through.  They are reducing the effectiveness of the traffic signal to process the cross traffic which then creates a backup in every direction, and they are blocking pedestrians from crossing safely.

While it may be tempting to try to sneak into the intersection on a yellow or even green light, hoping the traffic will move forward, that decision could now cost you a monetary fine up to $500 and up to 3 points on your driver’s license.  If you are caught blocking the box, Duluth PD can pull you over and give you a citation.  If traffic is congested and you see others in the intersection have not cleared the pedestrian crosswalk on the far side of the intersection, do not enter the intersection.  Wait until you see you have enough space to clear the intersection before the light turns red.  Otherwise you, my friend, have blocked the box.

Many cities across metro Atlanta are cracking down on box blockers and initiating campaigns to educate citizens and enforce this law.  While it’s difficult to change human nature and we are all in a hurry, you’ll need to think twice before entering intersections.