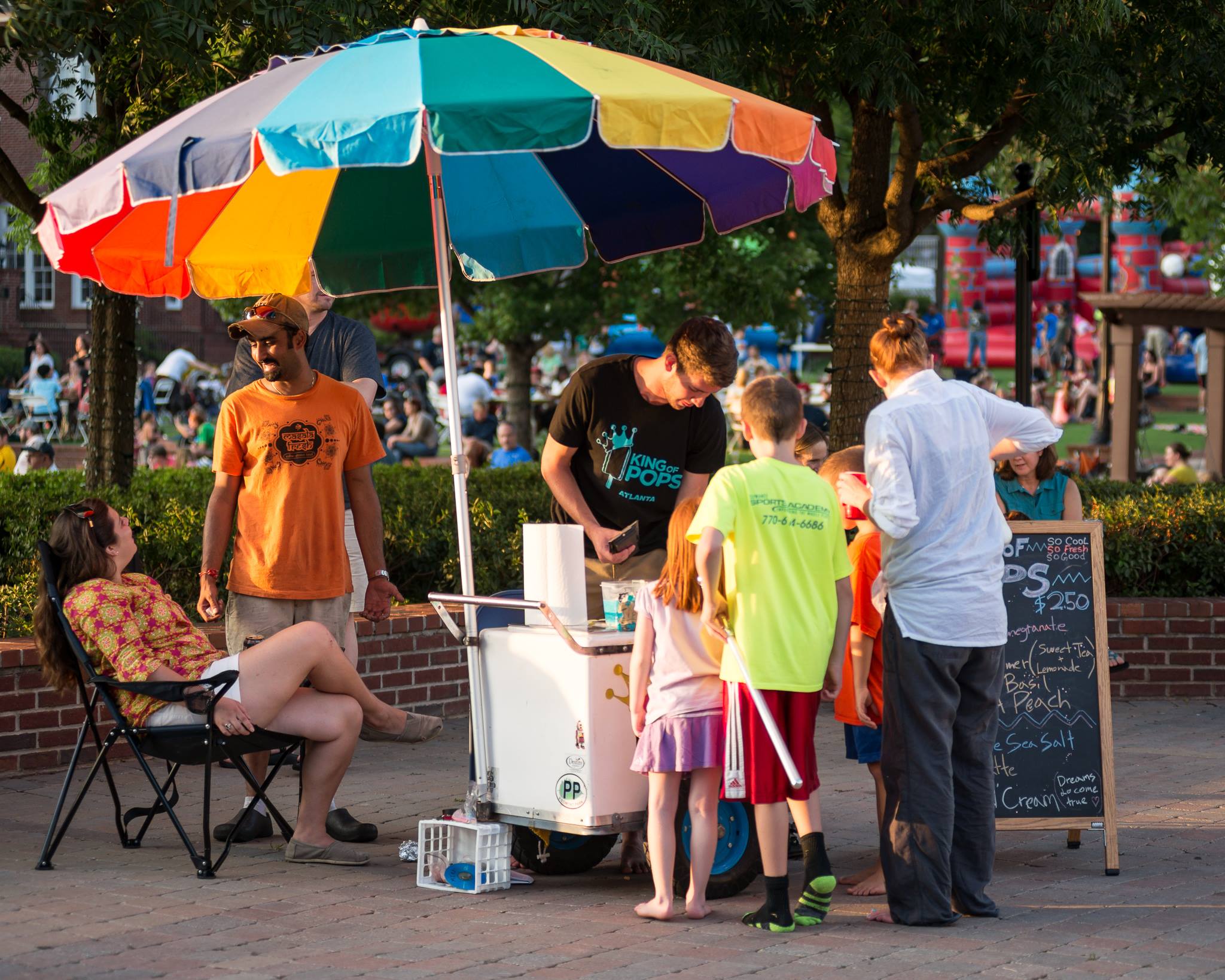 Balmy Friday evenings and the spacious Duluth Town Green are a perfect combination for the summer series premier of Flicks on the Bricks 2015 and Fridays-N-Duluth, upcoming May 1.  These popular Downtown Duluth events merge film, food, live music, and a festive atmosphere for residents and visitors in a scenic lawn area that all ages can enjoy!

The 2015 film season opener, Divergent, initiates this popular First and Third Friday summer series of downtown Duluth movies.   The Duluth Town Green magically transforms into one of the area’s largest movie-watching venues that is a family and dog friendly atmosphere, with each featured film beginning at dusk.  An array of food vendors will entice movie-watchers with delicious aromas during Flicks on the Bricks and other downtown activities for this first Fridays-N-Duluth event. Fun inflatables will be available for energetic kids to bounce away on the Town Green until the start of the movie.

Live music is another highlight of our Fridays-N-Duluth weekly events. The Highbeams will be featured from 6:00 – 9:00 p.m. at the May 1st opener. This popular instrumental and vocal trio, comprised of brothers Adam & Ian Pendlington and bassist Stephen Quinn, will entertain with their smooth guitar strokes and harmonies.

Other upcoming Fridays-N-Duluth June performances include The Free Byrds on the 15th, Station 7 on June 22nd, and the month ends with Craig Gleason on the 29th.   All musical performances occur on the Duluth Town Green from 6 – 9 p.m. and prior to Flicks on the Bricks featured movies.

Pack a picnic, grab a cooler for beverages, dig-out your lawn chairs or a blanket, leash-up your pooch, and come join us for the movie or to shop downtown, socialize, or just relax.  Watching a movie under the stars in a casual, outdoor environment is one of summer’s most memorable activities, and better yet, all Duluth Town Green events are free!  The weekly Fridays-N- Duluth and bi-weekly Flicks on the Bricks continue during the summer and into early autumn, with both concluding Friday, October 30th.

The May 1st film, Divergent, offers an all-star cast including Shailene Woodley in the lead role as Tris Prior.  She is joined by such notables as Ashley Judd, Theo James, Tony Goldwyn and Zoe Kravitz.   Most of the filming occurred in Chicago, with the premise of the movie specific to The Windy City.   Divergent and Insurgent, the 2015 sequel, are based on the popular four-book series by writer Veronica Ruth.

Divergent, rated PG-13, offers a look into a futuristic world where humans are divided into five factions and are forced to choose allegiance upon reaching adulthood.  A person is “Divergent” when their human virtues do not coincide with any traits of the five factions and is labeled an outsider.

Two weeks later, on May 15th, the Flicks on the Bricks feature is Big Hero 6.   This PG-rated 2014 Walt Disney Animation Studios film is an Academy Award Winner for Best Animated Feature and is based on the Marvel Comics superhero squad that shares the same name.

The plot centers on a 14-year-old robotics prodigy, Hiro Hamada, who resides in the futuristic city of “San Fransokyo” and forms his own superhero squad to combat a sinister masked villain. The characters are voiced by such recognizable actors as Damon Wayans, Jr., Alan Tudyk, James Cromwell, and Maya Rudolph.

Other Flicks on the Bricks movie offerings include: Planes, Fire & Rescue on Friday, June 5th and Maleficent on June 12th. How to Train Your Dragon 2 will be shown on July 17th, but there is no Friday film on July 3 due to other holiday festivities. View the list of summer movies.

Discover things to do in Duluth and spend a Friday night with family or friends or make new acquaintances and see what makes our city such a special place to live, play or work!